Nuclear engineers at Texas A&M have attached radioactivity sensors to the backs of cockroaches, making them remote-controlled. For what purpose? Not necessarily spying, like the cyborg beetles DARPA has developed. Apparently these little suckers are quite well suited for locating nuclear material. 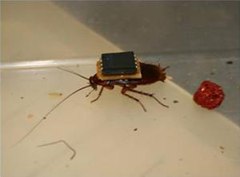 "'Cockroaches really are the perfect medium for this,' says William Charlton, an associate professor of nuclear engineering at the university and a principal investigator on the project. 'They can go for extraordinarily long periods of time without food. They exist on every continent except Antarctica. They're very radiation resistant, and they can carry extremely large amounts of weight compared to their body mass.'"

The team also lists additional tasks not too far from the goal of the cyborg beetles:

"Related applications include search and rescue activities, environmental monitoring, and counterintelligence….Even though American roaches prefer to be hidden, they are always associated with humans. Even though the presence of roaches can arouse disgust among some people, it will not necessarily arouse suspicion."