Another elegant and informative infographic (previously, The HowTo Behind an Exploding Grenade). This news graphic was created by Megan Jaegerman, while working for the New York Times in the 90's. 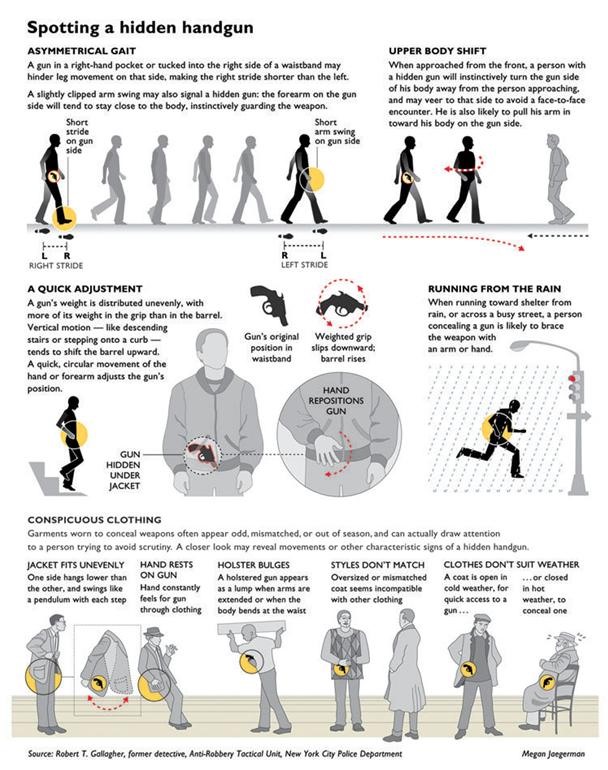 Jaegerman's reporting behind the infographic is quite interesting. She interviewed Detective Robert T. Gallagher:

"He was a New York City policeman for 18 years, who for much of that time worked as a plain-clothes undercover detective (anti-robbery tactical unit, confiscating illegal firearms) in Bronx & Manhattan, 6pm to 2am shift. He got very good at picking out people carrying weapons. So good that he received 1984 Governor's Police Officer of the Year Award. The great achievement was not just making gun arrests (1200 of them), but making them stick. The letter nominating him said he had 'an almost flawless conviction rate'. I believe he put it at '99.99'.

That's the whole point of his observation–not just to get a gun off the street, and then maybe have the arrest thrown out, which apparently happens too often–but to get from arrest to conviction and jail time. It's all about probable cause, he explained. First identify suspicious demeanor, appearance, behavior (which don't qualify as grounds for arrest), and then wait for probable cause, or legal grounds for frisking and/or arresting someone. He pretty much had to watch for enough clues to justify suspicion, which would allow him to stop a suspect. Then he'd identify himself as a policeman, and then he'd watch for the hand reaching toward the waistband, or the guy instinctively turning away, and pulling his arm in to his side. That would combine to give probable cause for a frisk. And when there's a frisk and a weapon, there's an arrest, and apparently with Gallagher, very often a conviction. The sequence is necessary, in the context of suspects' rights and legal requirements for arrest–evidence must exist that rises above suspicion to probable cause..." 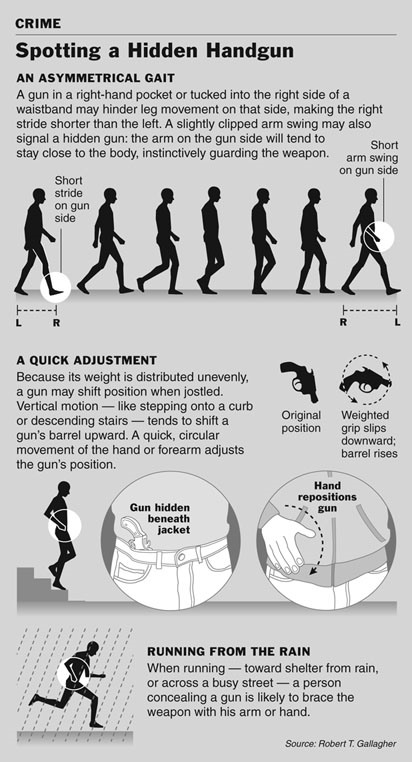